I will propose that English education in Japan, at the elementary school level in particular, be conducted in a larger setting of “Language Awareness”. This notion includes the following: First, language is a unique symbolic system that allows novel utterances, recursion and so on. Second, such properties are shared by languages of the world despite apparent differences. Thus education based on language awareness necessarily involves reflections on the first language and calls for realizing not only language variety but also universal properties that lie behind it.

The view that language has universal properties is supported by researchers in many fields of linguistics: pioneering linguists e.g. de Saussure, Sapir, language typologists e.g., Greenberg, Comrie, theoretical linguists, e.g., Chomsky, and so on. One can safely say that language is a genetically-endowed property specific to humans. Given that, it must be that such universality, or our tacit knowledge of language, is activated in the first language acquisition, the second language acquisition and foreign language acquisition/learning. Therefore, I argue that emphasizing aspects of language that are shared by the first and the target languages will facilitate learners’ access to the target language. It will also enhance motivation for language learning.

After clarifying that English in Japan is a foreign, not the second, language, I will discuss how we should divide aspects of language and match the sections with appropriate teaching methods. Vocabulary, or Saussurean signs, is arbitrary in principle, and therefore has to be explicitly “learned”, although learners will soon discover many subregularities as they go by. Much of grammatical knowledge, on the other hand, is universal, as mentioned above, so comes cost-free in principle. Hence all we have to do is explicate our tacit knowledge of language, such as “headedness” and “ambiguity”. I will show examples of how to do that in learners’ first language (in our case Japanese) and then how to apply such knowledge to the target language (English). For the aspects of grammar that are different between the first and the target languages, such as word order and agreement, I will introduce ways to fill them in, by utilizing “parameters”.

In the remaining part of the talk I hope to touch on the “division of labor” between human resources (language teachers and learners) and machines (CALL). Specifically, I compare CALL to gym exercise and argue that it is best utilized in vocabulary (words and idioms) learning and distinction of phonological patterns that are lacking in learners’ first language.

Saeko Urushibara is the Director of the Center for Fundamental Education at the University of Kitakyushu. She received her Ph.D. in Linguistics and Cognitive Science from the Department of Psychology, Brandeis University Graduate School, in 1994.

The Japan Asociation for Languge Teaching

JALT2020: Communities of Teachers and Learners 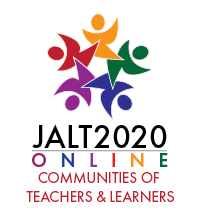